Take a sneak peek inside the book.

What are readers saying about Benevolent? 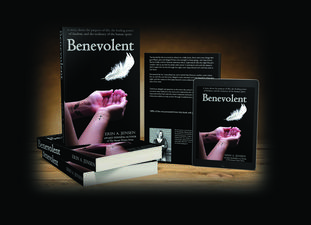 - "This book is a must read for anyone! I laughed, cried & felt like a piece of me died when the book was over. I even put off finishing the last 50 pages because I loved it so much!"

- "This has made me see life in a totally different way. It gives me hope. It encourages me to see the good in people and to believe in myself."

- "I've read this three times and think it's magical."

- "I LOVED the music element, it added so much for me! And I was hooked from the beginning."

- "It's just such a good book and I wanna scream to everyone to read it!!!"

What inspired me to write Benevolent?

Check out the story behind my story.

Tormented by the in-crowd at school on a daily basis, there were two things that gave fifteen-year-old Abigail Perkins the strength to keep going—her best friend, Danny Cobb; and her favorite television show, Supernatural. But the night Danny’s mother calls to say that his battle with cancer is nearing its end, and the doctors don’t expect him to live through the night, even Supernatural can’t dull the ache in her heart.

Devastated by her impending loss and crushed that Danny’s mother won’t allow her to visit him one last time, Abigail crawls into bed and cries herself to sleep that night; and she wakes to find Supernatural’s most endearing angel standing at the foot of her bed.

Told from Abigail’s perspective as she nears the end of her long life and revisits the moments that defined it, this story was inspired by the deep connection that Supernatural fans feel with the show’s beloved characters, and the show’s miraculous ability to help its fans through troubled times.